Why Chemical Drain Cleaners are Hazardous to Your Pipes 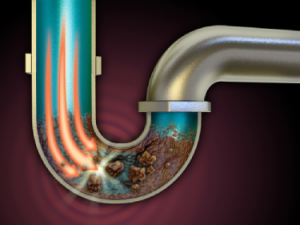 There are many substances that may clog the drains your home. Food particles, hair, soap, grease, and a variety of other things can eventually lead to a blocked sink or bathtub. However, before reaching for a standard chemical formula to fix the problem, you should learn more about the ingredients in these products or contact a plumber for a professional opinion.

Most chemical drain cleaners contain ingredients such as sulfuric acid and sodium hydroxide, the latter of which is also called lye or caustic soda. These chemicals are highly corrosive to metals and virtually all organic materials. They effectively clear clogs by a chemical reaction that creates heat. When this heat is released, the solidified clog turns into a substance resembling the texture of liquid soap, making it easier to move through the drain and ultimately into the septic tank or city sewer line.These chemicals are also quite heavy, which is why they sink to the bottom of any standing water to ultimately reach the clog.

Why Chemical Formulas Harm Your Pipes

Although the liquid drain cleaners mentioned above are effective, most plumbers in Lake Elsinore will tell you that they have the potential to cause serious internal and external damage to the plumbing system in your home. Additionally, they can eat away at your sink’s finish, thus ruining its appearance. Chemical drain cleaners can also settle on to your toilet bowl’s porcelain surface, eventually causing cracks.

PVC and plastic pipes are particularly susceptible to corrosion resulting from the use of chemicals, but such formulas can also negatively affect metal pipes. Dangerous complications can arise from pipe corrosion, including burst pipes that lead to serious flooding.

In addition, liquid drain formulas kill off all of the bacteria in your home’s drainage system. Although this may at first sound like a positive effect of such cleaners, some types of bacteria are beneficial and work to decompose organic substances in your pipes. When this “good” bacteria is removed, large blockages can occur, as the system does not run as smoothly as it would if this bacteria was left intact.

Many chemicals found in drain cleaners are also hazardous to your health if inhaled, and dangerous to your skin if contact is made.

Fortunately, there are ways to naturally unclog a drain if a blockage is not severe. For example, you can treat the clog with a combination of half a cup of vinegar and half a cup of baking soda. Simply allow the mixture to stand overnight and then flush the drain with boiling water. It is also wise to use this mixture approximately every 30 days as preventative maintenance. However, large clogs or constant issues with drain blockages are problems that should be addressed by a professional plumber in Lake Elsinore. Never try to deal with a serious clog as a do-it-yourself project, as the results are usually unsatisfactory. Rather, contact an expert who can effectively remedy the situation, as well as offer advice about preventing future clogs.